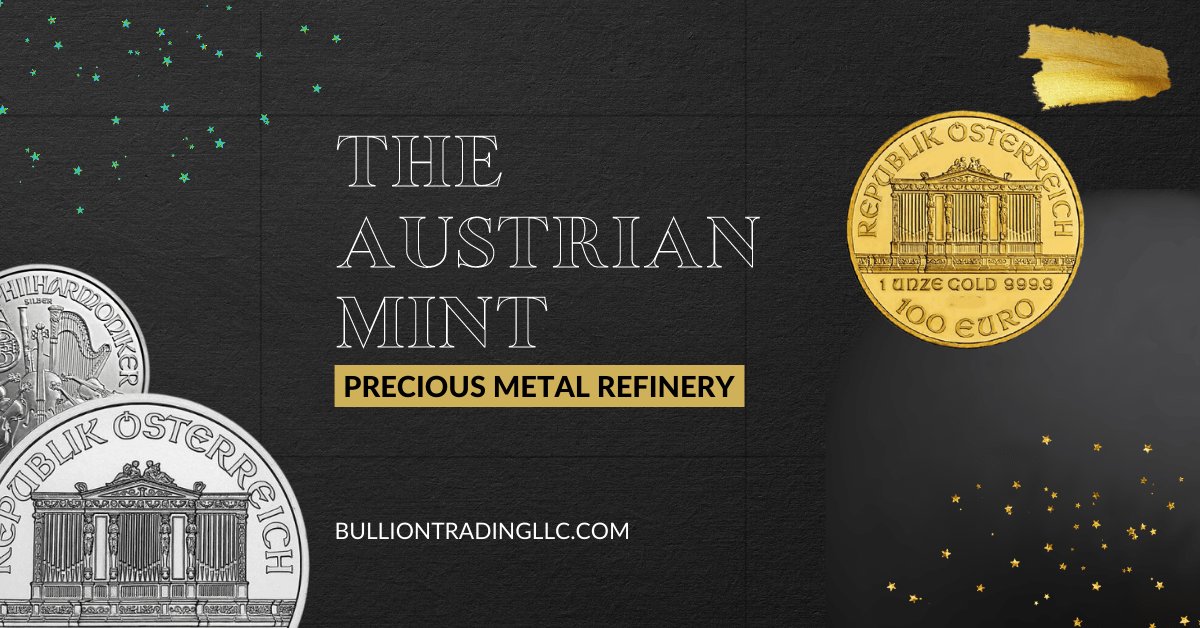 The Austrian Mint has become one of the world’s well-known manufacturers of bullion coins and bars, which was founded in 1988. Its headquarters are located at 1 Am Heumarkt in Vienna and are renowned for the German name of Munze Osterreich. The mint was completely operated by the National Bank of Austria up until 1989. Today, the mint is the producer of the famous Vienna Philharmonic coins, the Maria Theresa Taler coins, and also the Austrian Euro Coins.

These Vienna Philharmonic coins were named in honour of their predecessor, the Vienna Orchestra which is the national symbol of Austria. These Maria Teresa coins were named in honour of Empress Maria Teresa. The Austrian Mint gold coins are among the most dominant players in the world of bullion and make bullion coins and bars admired by collectors and investors all over the world.

The History of The Austria Mint

The history of the Austrian Mint can be traced to 1194 when Duke Leopold V was presented with 12 tonnes of gold by Richard the Lionheart. The Duke incarcerated Richard the Lionheart, who was then the English monarch, and then used his gift to create Austrian coins.  But, another 200 years passed before the decision to create the Vienna Mint was reached.

The mint first established was initially located close to Hoher Markt, then in Wollzeile as well as later located in Prince Eugene palace located in Himmelpfortgasse. At the beginning of the 19th century, the mint was relocated into Heumarkt situated in central Vienna which is where it remains until today. Since it was established, the mint utilized various methods and technologies to produce bullion coins. For instance, bullion coins were produced using hammer strikes prior to the 16th century.

Then, more advanced techniques like the rocker press, roller press as well as a screw press, were developed. Since 1830, a ring strike was added, which enabled the production of coins that had perfectly round shapes. This technique is still in use in the present and can produce as much as 750 pieces every minute. It is believed that the Mint in Vienna was the most important mint of the Habsburg Empire in the 1850s. Vienna was established as a state in 1918, became the sole mint located in Austria.

In 1925, the Mint began producing its first Austrian Schilling that was issued by the German Reichsmark between 1938 and 1945. In 2001 it was the time that Austrian Mint began to produce Austrian Euro Coins. Its Vienna mint, dubbed Munze Osterreich AG (Austrian Mint AG) was established as a public corporation in 1989. The mint became part of the Austria Central Bank. 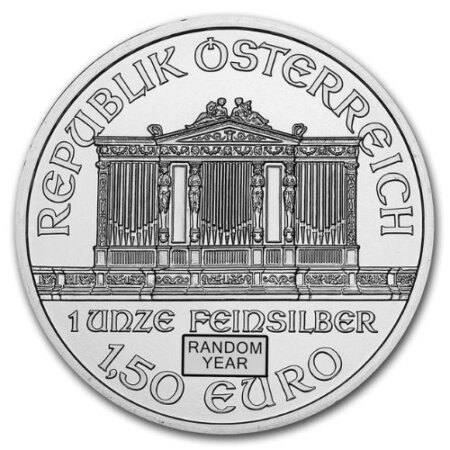 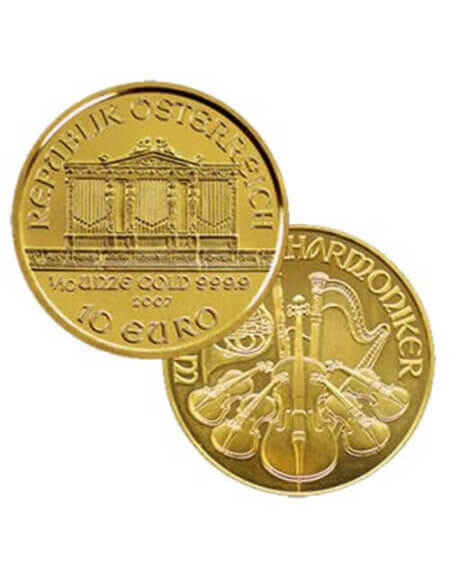 The Austria Mint produces bullion coins and bars with high purity levels using the latest technology. The products from the mint currently available in the market include:

For instance, this coin was the top-selling item in 1992, 1995, 1996 as well as 2000. The amendment to the Austrian legislation in 1998 allowed the production of gold coins, which would become the emblem of Austria. Designers came up with various ideas before choosing the instruments that are used by the famous Vienna Philharmonic Orchestra.

The Austrian Mint’s chief engraver Thomas Pesendorfer was the one who designed the coin. The reverse side of the coin features eight instruments from the orchestra, which include four violins, one on each side and a cello in the background as well as the Viennese Horn. The bassoon and harp are engraved on the reverse. On the front, this coin is adorned with the pipe organ that is famously used in the Goldener Saal, a part of the Viennese Musikverein.

Its design is inspired by the concept of Smart Mobility. Therefore, the face of the coin has been embossed with futuristic modes of public transportation that include an Air taxi, bicycles, and even a train. The concept of the coin is to reduce the amount of noise pollution that is generated in urban areas as well as global warming. The reverse of the coin is engraved with the blueprint for an air taxi.

The reverse of the coin accentuates how important it is to have public transportation in the near future. In particular, the niobium-plated ring at the center is inscribed with a bicycle and a scooter. They’re the most environmentally-friendly personal transport option. The silver niobium coin comes with the weight of pure silver at 9.00 grams (equivalent to 0.29 ounces). The coin weighs an approximate weight of 16.50 grams, with a price of face value 25 euros.

2020’s Alpine Treasures coin is a gold series of coins from the Austrian Mint that celebrates the endangered species of plants and animals indigenous to the Austrian Alps. The coins also showcase the diverse nature of the diverse Austrian landscape. This Alpine Treasure coin depicts the mountain peaks that rise to the highest point in Austria. The coins give a breathtaking panorama of mountain ranges in Hohe Tauern National Park.

The mountain is 3,300 meters high and is home to 300 mountains. Hohe Tauern host the pioneering national park in Austria that covers an area of 1,800 square kilometers. The coin is issued with a nominal value of fifty euros. It has 7.78 grams of pure gold, which is equivalent to 0.25 an ounce of .9999 Pure gold.

This 1/2 Oz Knights’ Tales Brotherhood Silver coin is the fifth and last coin of the series that was dedicated to the celebration of the Teutonic Order. It is believed that the Teutonic Order was an organization of military brothers that was founded in Acre which was a city for the military in the year 1190. The name of the order came after Acre, which was the German house of Saints Mary in Jerusalem.

The Teutonic Order is currently headquartered in Vienna. The building was initially used as a hospital for brothers. Later, the brotherhood permitted Christians traveling on pilgrimage to Jerusalem to utilize the hospital.

A hospital scene is a famous image that is engraved on the reverse of 2021’s Knight’s Tales Brotherhood Silver Coin. The image depicts an infirm member of the brotherhood receiving medical attention from a nurse while another brotherhood member keeps an eye on him. The reverse of the coin features an emblem of Teutonic Order, held by the heraldic Grein.

The coin is issued with a worth of 10 Euros and weighs 15.56 grams, which translates to 0.50 Oz. of silver that is pure. The weight of the weight totals 6.82 grams. Anna Rastl and Kathrin Kuntner created the coin.

The popularity of the Vienna Philharmonic band is due to the silver 1-ounce Blister pack. It is struck in pure silver, which makes it a favorite for investors and collectors. The release of Vienna Philharmonic coins in February 2008 was the first time that a European country introduced bullion coins with a purity that was .999 in the marketplace.

The market was in a frenzied search for silver coins that had high purity, therefore, one million coins were made in the initial one year after the launch which had.999 purity. In 2008, more than eight million silver philharmonic coins from Austria were struck. Millions of silver blister packs of coins are sold each year.

Thomas Pesendorfer designed these 0.25-ounce silver blister pack coins. The coins come with a value on the face that is 1.5 Euros. It is comprised of 1 Oz of pure silver, which amounts up to 31.07 grams of silver.

The 1/10 Ounce Gold Coin plus Packaging

1/10 troy ounce Vienna Philharmonic gold coin is the second-highest-priced gold coin from the series. It is priced at a reasonable price and measures 16 millimeters, making it attractive for gifts. The coin was made first in the year 1989, and it was released in the year 1991. It is made up of 3.11 grams of pure gold, with a purity level of .9999. It is 1/10 of an ounce in gold and is worth 10 Euros.

The 1/10 ounce Austria Gold Coin was the most sought-after coin around the world in 1992, 1995, 1996, and 2000. The coin is 3.12 grams of gold which is equivalent to 0.10 Oz. Austrian Mint head engraver Thomas Pesendorfer designed the coin. The beautiful design and the presentation of this 1/10-ounce gold coin have been a popular gift to give for Mother’s Day, Easter, Valentine’s Day, Father’s Day, and, Christmas every day.

The Austrian Mint produces Munze Osterreich gold bar using an accredited refiner Swiss firm Argor-Heraeus, SA. The bars are marked with their name, the producer along with the serial number weight, assayer’s numbers, and the purity level. They have a .9999 purity level and an amount of weight of 20 grams.

It is produced by the Austrian Mint and makes the bar using an approved refiner, the Swiss Company Argor Heraeus SA. Like the 100 grams gold bar, the 20-gram bar has its name, the maker and amount of weight, serial numbers, and purity level. The bar is made up of the equivalent of 20 grams of pure gold, with an even finer quality of .9999.

The Austrian Mint is run by the CEO and supervised by the executive committee. The Oesterreichische is the owner of the mint which is a subsidiary of the Austria Central Bank. The Austrian Mint receives large amounts from the bank. The revenue is in the form of capitalizing dividend claims and actual annual dividends.

In 2015, it was reported that the Austrian Mint was able to sell 1.32 million troy ounces of gold. This represented a 45 percent increase over the previous year. The same year, the Austrian Mint was able to sell 7.3 million pounds of silver bars and coins. This represented an increase of 58% over the previous year. In 2015, there was a 58% increase in the number of times that the Austrian Mint offered gold Philharmonic gold coins that totaled 756,200 troy ounces (23.52 tons). 1 Oz Vienna Philharmonic coin accounted for 647,100 troy ounces (20.18 tons) of the total gold coins sold in the year 2015.

The Austrian Mint distributes bullion coins and bars in a variety of ways. There are two physical stores that offer a variety of products. One of the physical stores is located at Am Heumarkt, which is located in Vienna. The second one is inside the Tyrol state, located in the western part of Austria. The website of the mint offers an online shop where you can purchase bullion coins and bars, as well as other products made of bullion at the Mint.

What are Austrian coins called?

The Austrian Bullion Coins are Vienna Philharmonic, in short, Philharmonic coins from Austria.