Johnson Matthey is a multinational company specializing in sustainable technologies and chemicals. The company is headquartered in London, England, and is listed on the London Stock Exchange. The company is also listed in the FTSE 100 Index.

The company was originally founded in 1817 by Percival Norton Johnson. He started a gold assayer company in London. George Matthey joins Norton in his business in 1851. Subsequently, the company changed its name to Johnson & Matthey. In 1852, the company was nominated as the official assayer and refiner to the Bank of England.

Johnson & Matthey soon opened up branches in Birmingham and Sheffield to enable the company to manufacture and supply jewelry, silverware, and cutlery. Furthermore, the company trades in raw materials and ancillary supplies such as flux and silver solder. In 1874, Johnson and Matthey’s mint was commissioned to produce the kilogram reference standard that was made from 90% platinum and 10% iridium.

From 1957 onwards, the Johnson & Matthey mint published a journal called Platinum Metals Review. The company formed a subsidiary called Johnson Matthey Bankers in the 1960s and became part of the London Gold Fixing. At the start of the 1980s, the bank diversified its activities beyond the bullion business. The bank ventured into giving high-risk loans.

This saw the asset of the bank more than double from 1980 to 1984. Most of the borrowers were few loyal clients that included Mahmoud Sipra and his company El Saeed group. Other prominent clients that partnered with Johnson and Matthey include Rajendra Sethia, Abdul Shamji, and ESAL commodities.

Johnson & Matthey alongside JMB were members of the London Gold Fixing. This made officials of the Bank of England worry about the bank going insolvent. This would undermine investor confidence in other bullion markets and the British banking system. As the move to prevent crisis in the banking industry, officials in the bank of England came up with a plan to rescue the mint on 30th September 1984.

Johnson & Matthey acquired Argillon, a business specializing in the production of catalysts in 2008 for €214 million. In October 2010, the company acquired the InterCAT, a company specializing in supplying catalytic cracking additives for the petroleum refining industry for $56.2 million.

Furthermore, in 2010, Johnson & Matthey opened a new £34 million emission control catalyst factory in Skopje located in North Macedonia. The plant produced catalysts for both light and heavy-duty vehicles. The mint was among the first FTSE 100 listed companies to come up with an integrated company report and won the Best Annual Report in FTSE 100 listed companies.

In 2012, the company won the Transparency in Governance Awards that was issued to recognize it for its ability to link sustainable business and environmental conservation. The company was nominated for Business in the Community Responsibility Award for Sustainability in the 2017 program.

The Acquisition of Johnson Matthey by Asahi Mint

On March 5th, 2015 Asahi Holdings in Tokyo Japan announced that it had finalized the process of acquiring the Johnson & Matthey silver refining business. The acquisition included the full ownership of the refinery located in Salt Lake City in Utah. Asahi also resumed ownership of the mint situate in Ontario and the investment services offered by the St. Catherines subsidiary in Canada.

At the time of the acquisition, Johnson & Matthey LBMA London Delivery status had been transferred to the respective gold and silver refinery. Asahi refining is accredited by LBMA that is responsible for dealing with gold complaints and London Good Delivery refiners.

Mitsuharu Terayama, the chief executive of Asahi Holdings stated that the company was humbled to acquire a mint with such a rich history and tradition. The Johnson & Matthey mint is known for quality, precision, and expertise. Hence, the management was convinced that merging Johnson & Matthey and Asahi will enable global growth and technological innovation. The merging will also help the mint establish and sustain stable relationships with global partners.

Robert MacLeod, the CEO of Johnson Matthey stated that selling the mint was part of a bigger plan focusing on using the company’s expertise in chemistry to come up with new technologies. The management strongly believes that acquiring the company was a wise investment because it will expand the revenue base.

Silver bars from the Johnson Matthey mint are among the most recognized in the world. The bars come in various sizes and all meet the IRS requirement for use in your personal IRA account. The company has been in the precious metal business for more than 150 years. In the 20th century, the company open branches globally in Japan, Australia, and South Africa among others.

Johnson Matthey is an award-winning business recognized globally for achievement in the business, environment, and international trade. The precious metal division of the company deals with large amounts of gold, silver, platinum, and palladium. Having refineries in the U.S and the UK has enabled the company to have a large base of global clients in the areas of technology, recycling, industry, and jewelry.

The Johnson Matthey silver bar provides variety in terms of look and size. Most of the bars have a plain design although they bear some unique and beautiful features. The weight of the silver bars ranges from 1 ounce to 1 kilogram. Each bar has a purity level of .999. The bars come in the 1 Oz, 10 Oz, and 100 Oz weights. Every bar comes stamped with the following:

The company cast some of the most trusted silver bars on earth. Apart from fine craftsmanship, there are many other benefits of buying silver bars from Johnson Matthey. Precious metals like silver are known to be effective tools for diversifying investment portfolios. Most companies with shares traded on the stock market normally come and go. However, because silver bars are a hard commodity, they secure and appreciate value with time.

Silver bars are a good secured investment to back up your retirement account. It’s considered one of the key benefits of owning physical precious metals. Furthermore, silver is known to be effective in protecting investors against inflation. The growing national debt and the massive printing of the U.S dollar have threatened its value.

The full name of the mint “Johnson Matthey Assayers & Refiners” is inscribed under the logo next to the purity level “Fine Gold .9999.” The weight of the bar “1 Ounce Troy” is also inscribed next to a unique serial number. However, serial numbers are absent on some bars.

It’s important to note that Johnson Matthey no longer produces gold bars. The mint prefers casting gold ingots instead. Minted bars have a flat surface because they are made from blank presses pre-cut to fit specific dimensions. They are made from solid sheets of gold.

The mint produced bullion coins in gold, silver, and palladium. One of the prominent coins from the series is the freedom rounds. The mint also produces decorative silver coins. The pioneering silver freedom series came in sets of 10 coins. The coins were minted to symbolize American freedom. The themes featured on the coin include:

The freedom bullion coins were only minted in silver.

Based on the annual report published in 2017/18, sales from Johnson Matthey mint grew by 7%. The revenue went up by 17%, which was attributed to the high prices of precious metals. The mint reported an operating profit of £359 million. This included the £90 million the company spent on major repairs and restructuring. The company also spent another £50 million on legal fees, but still accrued the aforementioned profits. 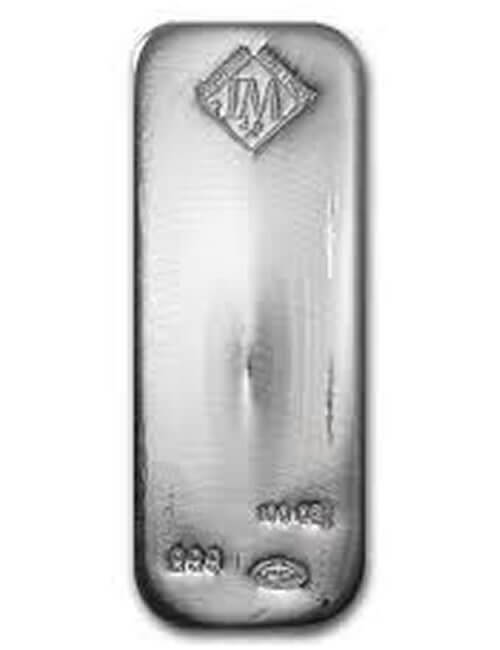