The Metalor Group previously called the Metaux Precieux SA Metalor is a Swiss-based mint founded in 1852. On July 12, 2016, the Tanaka Kikinzoku K.K. headquartered in Tokyo, Japan announced that it would acquire 100% of the majority shares in Metalor Technologies International SA. [1]

Metelor Technologies SA is a world-renowned gold refiner and manufacturer with headquarters in Neuchatel, which historical town 150 kilometers from Zurich. This town overlooks Lake Neuchatel. Most of the refining and casting of bars and other gold products takes place in a refinery plant. [2]

The Metalor Group has earned accolades as the only precious metal company to run major refineries in three different continents, which includes Europe, the Americas, and Asia. Metalor Technologies SA is a private company owned by the French Private Equity Astorg Partners, Swiss bankers, and business people. [2]

The mint has received several accreditations from different bullion markets across the globe. The accreditation includes:

When the company was established in 1852, it was founded as a watch case and gold manufacturer called Martin, de Pury & Cie. Metalor technologies were merged with the Bank of Le Locle in 1864. The Swiss Bank Corporation took over the company in 1918 and formally created a subsidiary called Metaux Precieux SA in 1936. [2]

Metalor Group headquarters was later moved from Le Locle to Neuchatel in 1947 where a precious metal refinery plant had been erected. In 1978, the company’s name was changed to Metaux Precieux SA Metalor. The Swiss Bank Corporation in 1998 merged with the Union Bank of Switzerland (UBS). This move transferred majority shares to a group of industrial investors. The name of the company was subsequently changed to Metalor Technologies SA in 2001.

The Metalor Group has a history of refining gold in North Attleboro, Massachusetts since 1989. The company has refined gold in Hong Kong since 1982, in China (Suzhou) from 2006, and Singapore from 2013. The gold and silver refinery Johnson Matthey Hong Kong was acquired by Metalor in 2007. [2]

Metalor is a Swiss-based company with global distribution networks and a diversified portfolio. Just like Tanaka, the company runs three main businesses that include recovery and refining, manufacturing electrical contacts, and producing plating solutions and equipment. The company focuses on recovering and refining precious metals with high purity levels. The company sources most of its precious metal bullion from North America, Europe, and Asian markets. [2]

Metalor has an excellent reputation, especially in Europe. The company is famous for producing sophisticated proprietary technologies used in the production of electrical contacts made of silver alloys. Lastly, Metalor is the manufacturers and sells plating solutions made of precious metals and the relevant plating equipment. The plating solution from the company is recognized as one of the best in Europe. [2]

Tanaka Kikinzoku K.K has not ventured into this market yet. Therefore, the acquisition of Metalor by Tanaka enabled it to expand its capacity to recover and refine precious metals in new geographical locations in North America, Asia, and Europe. The company has not yet captured a solid customer base in these regions. Tanaka acquired Metalor as a strategy to increase the sales for its products and services. [2]

The acquisition led to the optimal combination of the operations of the two companies in the fields of surface treatment and electrical contacts. Both companies have extensive experience in their respective fields. Tanaka has the intention of catering to the needs of its customers worldwide. The company plans to enlarge its worldwide footprint, especially in the continents of Europe and North America. [2]

From the time the company was created in Japan in 1885, the Tanaka group has created a diversified range of precious metal products. For instance, on April 1, 2010, the group became the majority shareholder in the Tanaka Precious Metals group. The move was aimed at strengthening corporate governance and improving the group’s overall service to customers. The move also enabled the company to have dynamic execution of operations. [2]

On the contrary, Metalor Group is a diversified industrial entity specializing in processing precious metals in 17 countries. The company employs more than 1,500 people. After the acquisition, the CEO of Metalor stated that the Tanaka group was the best shareholder to partner with Metalor. [2]

Tanaka is located in the Ginza area that has the highest land prices in Japan. The Tanaka store at the headquarters is stocked with sparkling gold and platinum jewelry. The store is not only popular with the local Japanese but also tourists from all over the world. Tanaka also runs businesses that produce jewelry and industrial appliances in Japan. [1]

In North America, the company operates four branches that include Tanaka America, which acts as the strategic base for the company’s plans to expand its operations globally. The company has taken part in the urban mining business for more than 50 years. The role of the company includes extracting and recycling precious metals from modern e-waste. [1]

The scrap the company recycles comes from old computers, automobiles, and smartphones. The Tanaka mint has technology that enables it to refine different types of precious metals that include gold and platinum. The company refines the metal to a high degree of purity. The merging of Tanaka and Metalor mints brings together two companies with experience and expertise in refining precious metals. [1]

Gold has a high market value and demand. This makes it a favorite among illegal dealers who use the funds to pay for their criminal activity. The Tanaka mint deals only in traceable precious metals because the company believes that trading in conflict-free precious metals provides value to all parties involved in the distribution chain. [1]

Most of the gold on earth is found hundreds of thousands of meters underground. This makes it impossible to mine such gold. Furthermore, most countries including Japan have few mineral resources. This means that recycling and refining minerals to high levels of purity are the best way of cutting down mining costs. This is one of the main ways used to acquire precious metal products on the current market. [1]

The demand for precious metals has driven Japan to set up sophisticated recovery and refining technologies. The demand for viable precious metals is expected to continue to increase. One of the reasons for the rise in demand is the increase in demand for high-precision radars. These radars are one of the main components needed to automate vehicles using IoT technology. By 2020, estimates showed that there’re over 30 billion units of IoT devices. [1]

Experts have noted that recycling precious metals aka “urban mining” is a trend that is likely to continue. On the contrary, experts have noted that the recovery of precious metals from scrap is likely to become difficult because of technological advancements. Nevertheless, Tanaka mint sees this challenge as an opportunity for the company to venture into recycling and refining. [1]

The remaining four businesses are in the recycling industry. The Tanaka precious metal group is among the few companies that take part in both the recovery and refining of precious metals and material development. [1] Tanaka is a trend center in the material recovery business. The company can come up with recovery methods even before the next-generation materials are produced. [1]

Gold Services and Products from the Tanaka-Metalor Mint

The Metalor Mint focuses on offering four main gold services and products which include:

Gold Refining and Recycling Of Scrap

In most cases, the company accepts gold products and materials in the following conditions:

Some of the gold refining methods used by the company include chemical chlorination (aqua regia) and electrolysis. The company records annually gold refining capacity of approximately 650 tons globally. [2]

The Metalor Mint issued the London Good Delivery 400 Oz bars in 1934. These were the first bars to be recognized by the London Gold Market. From 1934 to 1954, the gold bars were produced under the name of Societe de Banque Suisse. From 1954 onwards, the bars bore a Metalor-related stamp. [2] 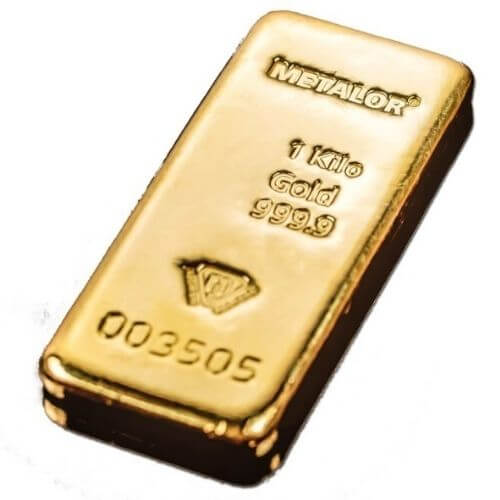