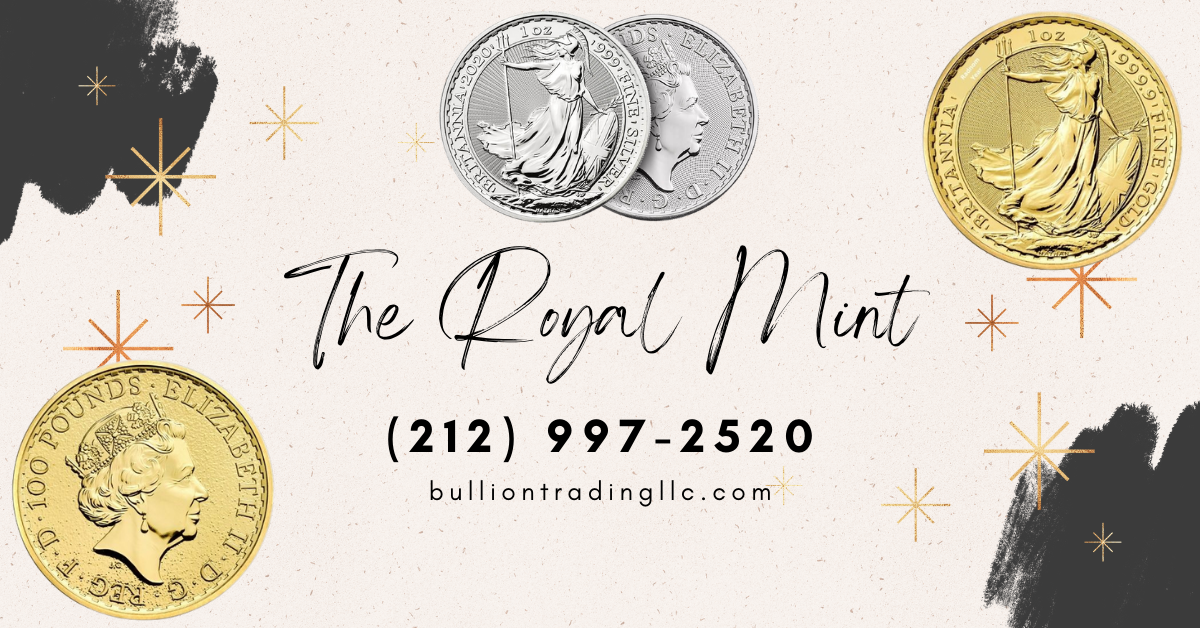 What is the Royal Mint?

The Royal Mint is a government mint that produces bullion coins and currency for the United Kingdom. It is registered as a limited corporation named “The Royal Mint Limited”. Her Majesty’s Treasury is the sole owner of the business and has an exclusive contract to produce the entire range of coins used across the country.

The mint also makes coins that are in circulation on international and domestic markets. In addition, the mint makes different kinds of commemorative coins, medals, planchets, and precious metals. The Royal mint sells 70 percent of its bullion coins to countries around the world.

The first mint which became known as the Royal Mint was established in 886 AD. The mint was first located in the Tower of London for 800 years then moved to the present Royal Mint Coat where it continued to operate until the 1960s. Following the time that Britain reduced its currency to the same level as other countries, the mint was relocated away from London and moved to Glamorgan in Wales, where it has remained in operation to the present.

It was privatized in 2009 and the Royal Mint became a state-owned limited company entirely owned entirely by Her Majesty. The Mint has grown significantly since the moment it was privatized and built an attraction centre that is worth £9 million.

The history of the Royal Mint dates back to the 2nd century BCE when Celtic tribes across the English Channel introduced coins to Great Britain. The first coins to be produced in Britain are traced to Kentish tribes, such as Cantii. The Cantii tribe made coins by casting instead of Hammering, which was the standard method at the time.

The Romans began their invasion of Britain at the time of AD 43. They established mints across England including London. It was believed that the Roman mint made coins for over 40 years until it was shut. A mint temporarily reopened in 383 AD, but it was shut down when Roman rule waned. Coins were not produced for more than 200 years before the English Kingdom began to emerge in the year 650 AD. In the end, nearly 30 mints were constructed throughout Britain and the biggest was situated in London.

In the year 1279, all mints in Britain were united under one system headquartered at the Tower of London. The other mints across London were closed, and only a handful of mints operated by the church remained to continue operating. In 1464, the government had produced documents that defined the functions of mints.

Prior to the English Civil War, England entered into a treaty in 1630 with Spain. Spain was willing to provide England with sufficient silver to keep the Tower mint functioning. Additional mints were constructed, with the most prominent one being Aberystwyth Castle in Wales.

In 1642, parliament took over the Tower mint in 1642. The change came after Charles I tried to arrest five members of the parliament who fled London. The king decided to construct 16 mints of emergency across Britain. The mints were situated at Carlisle, Chester, Colchester, Cork, Dublin, Edinburgh, Exeter, Newark, Pontefract, Salisbury, Scarborough, Cornwall, Truro, Weymouth, Worcester, and York.

King Charles increased the standards at the royal mint in Nottingham just prior to the Civil War. King Charles recommended the mining engineer Thomas Bushell to relocate his operations to the grounds protected by Shrewsbury Castle. The mint was in operation for three months, before the King ordered that it be relocated to Oxford.

The new mint in Oxford was officially opened on the 15th December 1642, in New Inn Hall, where it is now St. Peter’s College stand. The mint made the silver bars and coins of foreign countries and made them into coins in a short time. Bushell was the master-worker of the mint and the warden. Bushell worked with famous engravers such as Nicholas Briot, Thomas Rawlins along with Nicholas Burghers.

After King Charles I was executed in 1649, The Commonwealth of England started to create its own coins. First time ever, the coins were made in English rather than Latin. The coins were also plainly styled as compared to the coins issued by the reign of King Charles. Peter Blondeau , the french engineer, was invited in 1649 to take on the responsibility to modernize the minting process at the royal mint. France was already banning the production of coins hammered and was replacing them with milled ones.

Therefore, in 1848, the Royal mint commission was established to address the issue. The solution was outsourcing refining to a third minery. This would remove the refinement process of the Mint. The task of overseeing the mint was assigned responsibility of overseeing it to Anthony de Rothschild, a direct descendant of the Rothschild family. His international investment banking firm NM Rothschild & Sons took control of the Mint.

Rothschild created the company under the title Royal Mint Refinery. Britain’s influence and power increased when the country established new colonies overseas. In Australia, the local authorities approved legislation to allow the establishment of an office from the Royal Mint in Sydney. In 1966, the federal government had a plan to destroy Britain’s currency. This resulted in the withdrawal and the re-mining of millions of brand new coins.

In 2012 London won the bid to host the Summer Olympics and The Royal Mint won a bid to mint medals for Olympic and Paralympic games. In the end it was the Royal Mint that struck 4,700 gold silver, bronze, and gold medals. Every medal struck fifteen times using 900 tons.

The Royal Mint in 2004 announced plans to create a visitor center for visitors in Llantrisant. The visitors’ center was a place for the public to take an informative tour of the facility and also learn about the history of the mint. To celebrate the 50th anniversary of its operation, the mint began producing Royal Mint bullion bars and coins under the name, Royal Mint Refinery in 2015.

In 2020, the mint began listing its financial product in the stock market. The Royal Mint introduced gold commodity exchange-traded funds, listed on the London stock exchange. 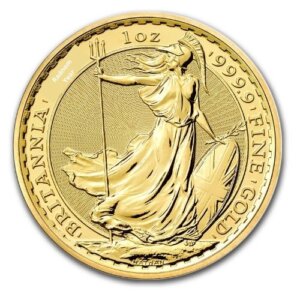 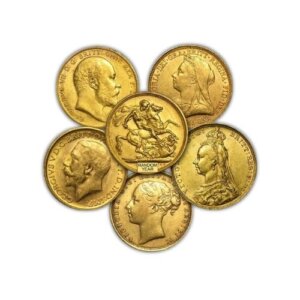 There are many gold and silver bullion coins made by the Royal Mint. These coins are offered in various series. For instance, the Sovereign coin is among the first coins to be issued by the mint. Sovereign bullion coins feature the famous picture of Saint George fighting the dragon. It is struck with 22K gold.

Another coin from the set is the Britannia fine gold bars and coins. They feature the classic picture of Britannia created by Philip Nathan. It is also known as the Royal Mint also produces the Lunar coins. They are made of high-quality gold and are part of the Shengxiao collection. The last coin of this series is the Queen’s Beasts that bears the Royal Coat of Arms.

The famous Britannia coin is among the most popular products of the Royal Mint. The coin has gone through changes from Roman times. Britannia has become a symbol for Britain. In the 2021 edition of the coin, Britannia is depicted as leading the way, as it always has. This new coin also comes with four security measures that increase the security of the coin.

The brand new Britannia coin was based on the design developed by Philip Nathan in 1987 and was designed by the team that created the most secure currency around the world, known as the United Kingdom £1 coin. The coin features a surface animation that depicts the flow of water behind Britannia when the coin moves.

The Features of the Britannia 2021 Gold Coin

The Royal Mint has created beautiful and safe coins for over 1,000 years. This Britannia 2021 one-ounce silver bullion coin features the same appearance and security features as that of the Britannia Gold bullion Coin.

The British Isle used banners and shields to symbolize identity for a long time. However, the country created a coat of arms design that was a representation of the spirits of the people. The Royal Arms inscribed on the silver bullion coin is the official coat of arms of the monarch in power.

The symbol is visible on all government documents as well as monuments throughout the UK as well as all over the world. Timothy Noad, a heraldic artist, redesigned Royal coats of arms, which are engraved on the coins of bullion that were released in 2009.

The coronation ceremony for Her Majesty Queen Elizabeth II occurred in 1953. A statue depicting 10 heraldic beasts was erected in front of the entrance to Westminster Abbey. The beasts were engraved on the coins which belong to Her Majesty’s Beasts Collection. These creatures are the ancient symbolism of ancestry and strength.

This coin is part of the Beast Collection and it features the White Lion of Mortimer.

Features of the White Lion of Mortimer 2 Ounce Silver Coin

The Royal Mint has distributors in more than 20 countries across the world. The mint also has an International Sales Department which is responsible for the distribution of its collection.

The key Royal Mint distributors include:

Is the Royal Mint safe?

Can I buy coins from the Royal Mint?

Is it worth buying Royal Mint coins?