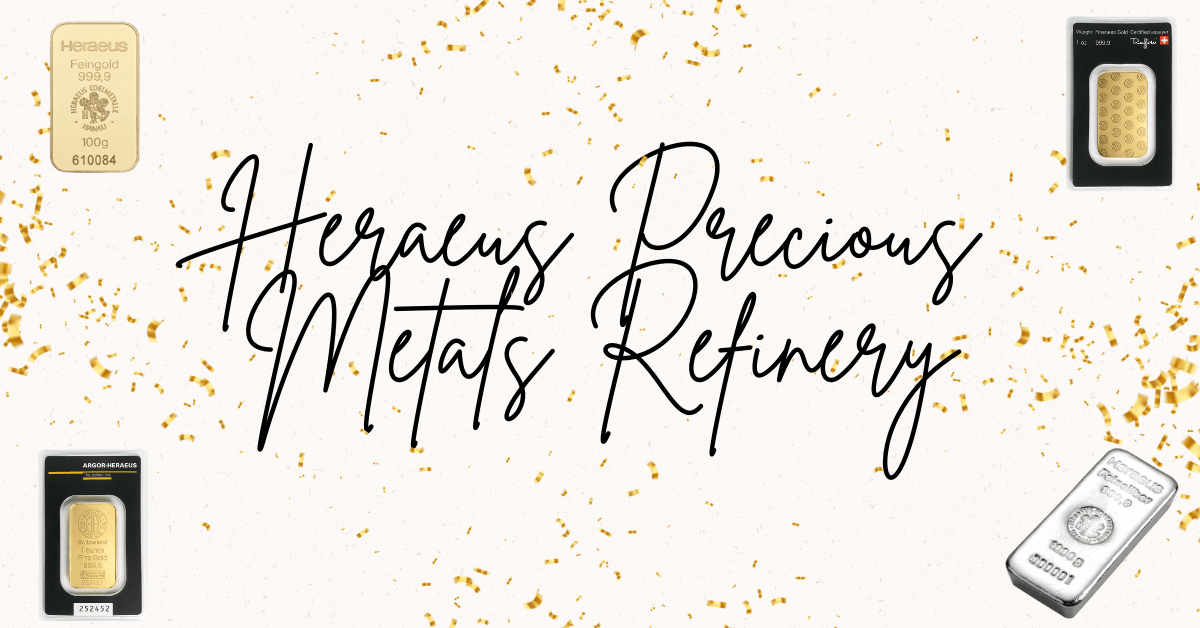 Heraeus is privately owned by the Heraeus family and is situated at Hanau, Germany, with around 14,900 employees spread across 40 countries around the world. Hanau is located in Germany. Hanau is approximately 25 km away from Frankfurt.

Heraeus Group‘s main operation is trading and processing silver, gold as well as other precious metals. The customer base of the Heraeus group expands to more than 50 countries compromising the electronic, telecommunications, electricity, transportation, chemicals mining, watch, and metals industries.

Heraeus offers a variety of bars of precious metals suitable for investment globally. Heraeus Precious Metals, due to a huge production capacity in processing precious metals, produces and has a capacity to refine gold from 400-500 tonnes annually.

The four Heraeus precious metals trade desks are located at Hanau (Germany), Shanghai, New York City, and Hong Kong execute orders, offer account management and finance services for its customers and are a significant contributor to the company’s annual revenue.

Heraeus Precious Metal is a huge part of the German gold market. It also plays a key role with its participation in the Swiss gold market because of its ownership in part of the major Swiss refinery for precious metals, Argor-Heraeus. Other shareholders of Argor-Heraeus include Austrian Mint and Commerzbank. 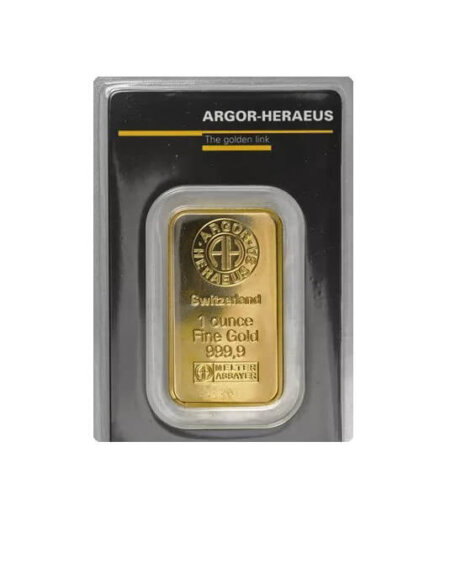 Heraeus is among the top suppliers of precious metals globally. In terms of physical investments in precious metals, Heraeus bars are among the most well-known investment options. In 1972, Heraeus manufactured London Good Delivery Silver, Platinum, and Palladium bars.

Heraeus precious metals produce large Good Delivery Bars for wholesale as well as smaller bars for investment in the bullion market. Gold and silver grain for industrial use as well as the jewelry market.

Heraeus produces a variety of high-quality investment-grade precious metals bars. As of 2012, every Heraeus gold bar comes with a unique serial number as well as a quality certificate. Minted bars are packaged as blister cards (85 mm x  54 mm) and the cast bars are sealed with plastic that contains the certification. In the gold bars market, Heraeus manufactures the following bars:

Notice: For an additional charge, the minted Heraeus gold kinebars are offered with an attractive security feature. Kinebars are extremely secure.

The company also manufactures bars for fabricators that weigh 12.5 Kgs.

Silver bars can be cast or minted, depending on the dimensions. Each of the Argor Heraeus Silver bars comes with 99.99% purity. Minted bars of sizes between 1oz and 250g are packaged in blister cards that do not have a serial number. The foil used is plastic to seal the cast bars that range in weight from 250g up to 5kg. The 15kg bars aren’t packed.

On Bars weighing from 1kg and up, the serial numbers are stamped. Cast bars and minted bars do not come with certificates.

History of the Heraeus Precious Metals

Heraeus Group is a renowned multinational family-owned company in Germany. It is amongst Germany’s most prominent family-owned companies in terms of revenue. The company’s roots can be traced back to the family pharmacy established in 1660 by Isaac Heraeus (1636 -1676).

In 1851, Wilhelm Carl Heraeus, a chemist, and pharmacist took over his father’s “Einhorn Apothecary” in Hanau at 24.

In the past, Hanau was a town of goldsmiths. Platinum was used in the making of jewelry in this town. The hardness of platinum and its high melting temperature of 170° Celsius caused it to be highly challenging for goldsmiths.

Wilhelm Carl Heraeus, who has a degree in pharmacy and chemistry, was aware of goldsmiths’ challenges. He began to work on new methods for refining platinum. After several tests with his custom-made oxyhydrogen blowpipe, he was first able to melt platinum in large amounts and produce pure metal in 1856. In 1857, W.C. Heraeus successfully produced about 30 kilograms of pure platinum. In 1896, he was making and processing over 11,000 kilograms of platinum. Wilhelm Carl Heraeus started laying the foundations of a global family-owned business.

As the company grew, it required new facilities and premises, and so the W.C. Heraeus Platinum Smelting Factory was founded in the vicinity of Hanau in 1896. It employed 40 employees. Wilhelm and Heinrich Heraeus, the two sons of the founder, became the manager two years later.

Third-generation members of the Heraeus family took over the business in 1927. It was led by Wilhelm Heinrich Heraeus and his cousin Reinhard Heraeus who were at the company’s helm for more than 40 years. Heraeus was able to profit from several breakthroughs in materials during this time. For instance, they were the first to create dental alloys.

By 1939, the company employed approximately 1000 employees with annual revenues of 20 million Reichsmarks. Heraeus began to expand internationally in 1958, initially in France and Italy. Then Japan, the United States, South Korea, and the Philippines.

From 1983 to 2000, Jurgen Heraeus, brother of Reinhard Heraeus, a director since the year 1970, was in charge of the company. The company was in its fourth generation at this point. The company has grown into a global network of companies.

Heraeus Holding GmbH was established in 1985 by the Heraeus Family to be a holding vehicle for the entire business. There were five significant divisions within the company that included Heraeus Quarzglas (quartz glass), Heraeus Noblelight (specialty lighting source), W. C. Heraeus (precious metals), and Heraeus Electro-Nite (sensors) as well as Heraeus Kulzer (dental as well as medical equipment).

Heraeus Metal Management: Specializes in products for the precious metals cycle as well as recycling of precious metals, Metals trading, and the pre-production and melting of rare metals

Heraeus Performance Products: Manufacturer of Products that can be found in the industry of hard drives and the automotive and watchmaking industries, in lab equipment as well as the decorative color industry

Heraeus Electronics: Manufacturer of components for the packaging and assembly of electronic devices

Heraeus Chemicals: Specializes in the creation of solutions and products for the pharmaceutical and chemical sectors

Heraeus Medical Components: Provides professional, complete manufacturing of medical components and meets a variety of functional requirements) as well as Heraeus New Businesses (a platform for new companies and high-growth).

Heraeus Medical: Focuses on products that aid in the treatment of surgical traumatology and orthopedics

Heraeus Quarzglas: Specializes in the manufacture and processing of high-purity glass

Heraeus Noblelight: Global market and technological leader in the field of lamps with special-purpose applications and modules that operate in the infrared to ultraviolet wavelength range for scientific, industrial, and medical uses are retained, bringing the global total of business units to 11.

As the primary strategic management division, Heraeus Holdings sits above the other businesses. More than 100 Heraeus businesses in the group employ more than 14,900 employees.

The revenue of Heraeus is divided into two parts:

Precious metals also are one of the most significant sources of revenue for products of EUR 1.19 billion as of 2014. In 2014, goods made of precious metals and trading made up 86 percent of the total sales.

In 2014, Asia was responsible for over half of Heraeus’ revenue from products which highlights its importance in Asian markets for the company’s success. In 2015, Heraeus generated a total income of EUR12.9 billion and earned EUR1.9 billion of revenue, excluding precious metals.

With over 12,500 employees worldwide, around 100 subsidiary companies are spread across 38 countries. In 2016, the Foundation for Family Businesses named Heraeus one of the top 10 family-owned Businesses. In 2019, Heraeus generated EUR22.4 billion in revenue and had around 14,900 employees across 40 countries.

In 2015, Heraeus Group’s precious metal services were organized into one business unit presently known as Heraeus Metal Management. Heraeus Precious Metal Management is the group’s refining, recycling, and trading division that has around 750 employees across the world.

These are the Heraeus products and services offered to the global precious metals industry:

Heraeus is a trading platform for silver, gold, platinum, ruthenium, iridium, osmium, rhodium (a semi-precious material), and palladium. The metals recycling facilities of the Heraeus group are located within Hanau located in Germany, Taicang in China, Port Elizabeth in South Africa, Udaipur in India, Santa Fe Springs in California, California, and Wartburg located in Tennessee, U.S.

What is Heraeus gold?

What is the value of a 10 oz silver bar?

The value of 10 oz Silver bars from Heraeus can be derived from the spot price of silver along with the premium added by the silver dealer.

Where can I find my gold serial number?